How the Indian INR gets weaker against the USD: Know how currency exchange fluctuations work? 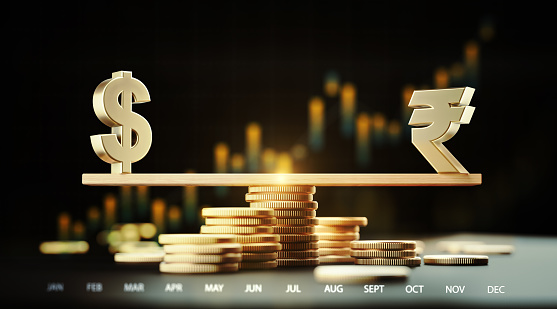 Tourism is an essential source of foreign exchange earnings. Increased foreign exchange results in an increased interest in tourists to venture abroad, thus helping the economy grow. Students in the tourism industry at one point have to deal with the concept of currency and their exchange rates across the world since travelling people is an eminent activity. The US Dollar serves as the world’s most dominant currency. Popularly regarded as the benchmark currency, its value determines that of other currencies in the universal market. Traders worldwide depend on the U.S. dollar as a stable, reliable trade currency. The use of the dollar as such a trade currency is largely due to its history of stability and usefulness for investors and traders around the world. To determine the value of the Indian currency, it is often compared to the USD. However, knowing about its history might help you understand India's economy better.

For a very long time, there has been a plethora of fluctuations witnessed in the value of INR against USD. During early independence, Rs 4.76 was exchanged for 1 dollar. If we were to go back in time, it was once when the Indian rupee rules over the USD. Foreign exchange deals with buying or selling currencies other than one's native currency. The rate of how much of a foreign currency you would get in return is the price on that exchange. Our main concern here is why is there such a wide gap between the two currencies, and why it keeps on increasing as the years pass by. Well, to clarify, importing more than you export puts pressure on the local currency. When this happens, the dollar is usually worth more in the country and can be a point of concern for domestic businesses operating in that country. The flow of capital from India tends to impact the rupee-dollar exchange rate, causing the rupee to depreciate. Due to depreciation, the imports of crude and raw materials will be more expensive. This could cause higher prices in stores, as well as higher production costs in the plant.

A fixed or pegged rate is determined by the government through its central bank. The rate is set against another major world currency (such as the U.S. dollar, euro, or yen). To maintain its exchange rate, the government will buy and sell its own currency against the currency to which it is pegged. For example in India, this role is carried out by the Reserve Bank of India. The 1 USD to INR exchange rate has always had extreme volatility since its inception and has seen a plethora of fluctuations over the years.

Export-Import holds the key to pushing the demand for a currency of a country. For example, if India exports more to other countries than it imports from them, the demand for the rupee will go up, leading to appreciation. In the reversed scenario, the value of the rupee will downgrade. The exchange rate tends to play an important role in economic development and hence its exchange rate has a significant relationship with tourism. The exchange rate has an important role to play in the tourism sector, especially in attracting international tourists. The exchange rate or the currency value attracts or repels foreign tourists since it would be expensive for them to visit a country with less value a currency than their domestic currency hence in this way exchange rate tends to influence the tourism sector significantly.